The road from Liberia to Fairfax County, with vision to regain the reins of an organization bruised by claims of bullying and harassment. 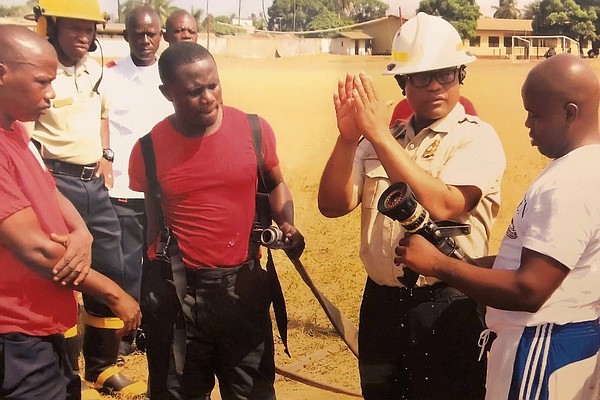 Fairfax County Fire and Rescue Department Chief John Butler didn’t grow up wanting to be a firefighter. Born in Liberia, he was 12 years old when his family was forced to flee the country following a military coup in April of 1980.

“My father was among those identified as someone the new regime wanted to do away with,” Butler said in recalling the circumstances that led to his immigration to the U.S. “I’m not sure why, since he was not involved in politics or the military — he was a businessman. But life had become tumultuous and my parents decided that was not how they wanted to raise their family.”

Less than a month later, the family had resettled in Columbia, Md., where Butler graduated from Oakland Mills High School. He would go on to serve in the U.S. Marine Corps and was home on leave when he accompanied a friend to take the test to become a Howard County firefighter. That decision would change his life, leading to a career in firefighting and ultimately to his being named the first African American fire chief in Fairfax County.

“I wasn’t looking for a job,” Butler said. “I was loving being a Marine. But while I was waiting for my friend a recruiter convinced me to take the test and when I passed, I thought ‘Why not this?’ As I look back on this path, the wild ride from that lobby to where I am now is never lost on me.”

BUTLER WAS NAMED last summer to replace Chief Richard Bowers and was formally sworn in Sept. 4, 2018. Prior to that he served 26 years with the Howard County Department of Fire and Rescue Services. He began as a firefighter-paramedic, rising through the ranks to serve in a variety of roles, including as battalion chief, emergency medical services chief and administrative chief before being named Howard County’s first African American Fire Chief in 2014.

“Howard County [Fire and Rescue] is a high performing organization, but it was time to take on new challenges,” Butler said of his move to the helm of Fairfax County, a department three times the size of Howard County. “I always thought highly of Fairfax Fire and Rescue and am mindful of the more recent challenges. I thought I could bring something to the table — to help them get realigned and continue going in a positive direction.”

In addition to his firefighting experience, Butler served in the Marines for 21 years, including two combat tours.

“Joining the Marines is one of the best decisions I ever made,” Butler said. “In combat is where I grew a lot of my character. It’s where I learned how to lead teams and how to lead others on a shared mission and vision.”

Butler’s vision for FCFRD is to regain the reins of an organization bruised by claims of bullying and harassment.

“I came here to establish guardrails, set a vision and build a healthy team,” Butler said. “We have a talented, diverse department, but we can’t solve problems using the same thinking that created those problems.”

BUTLER HAS CREATED an equity and inclusion council and implemented code of conduct and social media policies. Social media policies in particular have been under scrutiny since the 2016 suicide death of firefighter Nicole Mittendorff following claims of online bullying.

“We need to reestablish and rebuild the relationships that have taken a hit over the years,” said Butler, who was a defendant in a termination suit brought by a Howard County battalion chief based on social media postings.

“The case — Buker vs Howard County — went to the Supreme Court,” Butler said. “We prevailed and stuck to strong social media policies and a code of conduct that basically says that if it disrupts the workplace, we can hold you accountable. That’s the platform I have for here — I won’t tolerate cyberbullying or any behavior that disrupts the workplace.”

Butler, 52, holds a Master of Science in management from Johns Hopkins University and a Bachelor of Arts from the University of Baltimore. He is a graduate of the National Fire Academy’s Executive Fire Officer Program and from Harvard University’s John F. Kennedy School of Government Leadership in Crisis Program.

IN 2014, Butler was the recipient of Johns Hopkins University’s Global Achievement Award for his humanitarian work in Africa. He has made multiple trips to the Republic of Liberia, most recently in January of this year, when he assisted in training recruits for the Liberian National Fire Service and visited the Sayklon Orphanage. Butler uses his personal vacation time and pays for all expenses out of his pocket.

“Whenever I return from trips such as this, I am reminded of how fortunate we are to have the things we have, the infrastructure and quality of life that we enjoy and most often take for granted,” said Butler following his most recent trip.

Butler, who is married with three adult children, hopes to have a positive impact in Fairfax County.

“I am really loving the department, the people I am working with and the direction we are going,” Butler said. “Most importantly, I hope that my emphasis on trust, courageous conversations and human engagement is making a difference. But the best way I can impact the organization is by modeling good behavior.”