Lawmakers reject bill that would have required governor’s school to admit poor students. 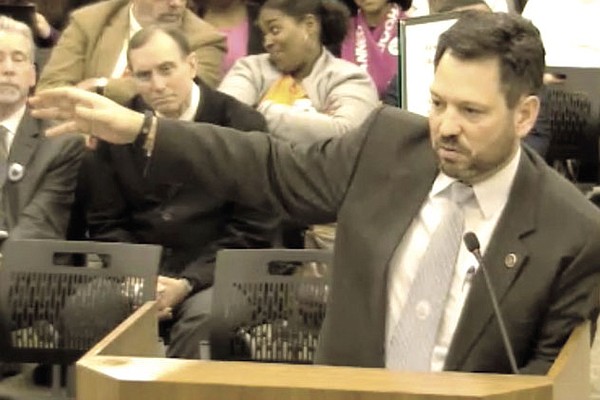 Don’t fix what’s not broken. That was the message last week from a bipartisan group of state senators, who rejected a bill from state Sen. Scott Surovell (D-36) that would have required Thomas Jefferson School of Science and Technology to admit more students who live in poverty. Surovell’s bill had only one yes vote on the Senate committee that rejected it, state Sen. Mamie Locke (D-2), an African-American senator from Hampton Roads. The vast majority of the senators on the Education and Health Committee, which includes several prominent members from Fairfax County, rejected the idea.

"Quotas are a politically charged topic, and I don’t think we should be going there,” said state Sen. Janet Howell (D-32). "I don’t think we down here have any business meddling with the decisions of the Fairfax County School Board on this issue.”

Concerns over the admissions policy have been festering for years at the school, which currently admits about 2 percent of its students who live in poverty. Back in 2012, the NAACP worked with a group known as the Coalition of Silence to file a civil rights complaint with the U.S. Department of Education about admissions policy at the school, which has 2 percent Hispanic students and 1.5 percent African-American students. The complaint charged that black and Latino students are being shut out of TJ because of systematic failure in the public schools to identify gifted students who live in poverty. The complaint didn’t amount to much, Surovell said, which is why he said he filed the bill.

“The local school system hasn’t dealt with it. And the School Board won’t deal with it,” said Surovell. “Given that my School Board seems completely incapable of dealing with the problem I figured it was time for the legislature to do something about it.”

THE BILL would have required the school to admit about 15 percent of students who live in poverty. It would also put an admissions cap on 15 students per school, an effort to prevent certain schools from dominating the admissions roster.

Plus it would have required that the school admit five students from every middle school in its area, a requirement that would boost admissions from Surovell’s part of the the county which is currently underrepresented in admissions to the school. Critics of the school’s admissions policy is that it creates a pipeline from schools such as Rachel Carson Middle School while ignoring schools in the Route 1 corridor.

“People move right before seventh grade to get into Carson so that they can go to TJ,” said former teacher Patricia Hyning. “There are parents who are buying their kids a seat at TJ, and not all children have this same opportunity but they have the aptitude.”

Recent years have seen growing concern that parents are gaming the system, investing in expensive tutoring programs and using their wealth to attend schools that have a better chance of getting into TJ. That’s led to some reform efforts, including organizational changes at Fairfax County Public Schools that has senior officials focused on making sure all students have the same opportunities regardless of what schools they attend. Nevertheless, senators believe that high achievers will be able to make their way into the TJ regardless of where they live.

SCHOOL OFFICIALS rejected the idea that lawmakers in Richmond needed to take action to address problems in Fairfax County. They said that the new superintendent is making efforts to increase availability of accelerated math and science experiences to parts of the county that currently don’t have them. The idea that the General Assembly might institute a rigid quota about how many students who live in poverty should be accepted — or how many students from specific schools should be accepted — is anathema to the merit-based admissions policy they say has has worked well for years.

“The reality is that TJ is a highly competitive school, and only about 17 percent of all applicants get in,” said Michael Molloy, director of government relations for Fairfax County Public Schools. "We welcome this discussion, but we don’t think this is the right venue for it. This discussion should be held among our constituents, among our stakeholders.”

Surovell says he remains frustrated that his constituents can’t seem to get their students into the school.