Voters choose candidates who have been planning their campaign for years rather than upstarts newly energized against Trump. 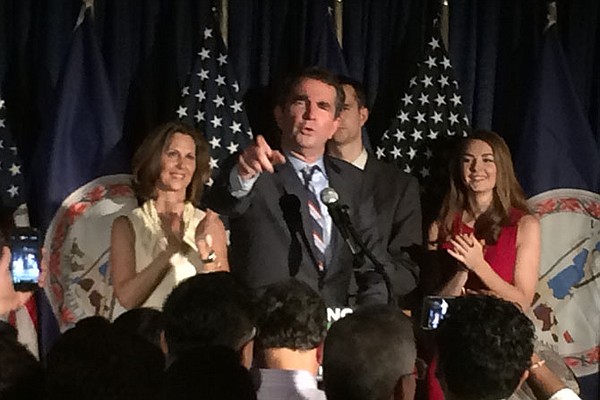 Slow and steady wins the day. That’s the message Democrats sent this week at the polls, selecting two candidates who have essentially been running four-year campaigns for their ticket in November.

Lt. Gov. Ralph Northam has been planning a run for the Executive Mansion for years, lining up almost every elected official in the state before anyone else even thought about entering the race.

“I’m a fighter,” declared Northam at his victory party, which packed a sweltering Highline RxR in Crystal City. "I’m ready to lead the fight. Are you ready to join me? Let’s get it done!”

Northam won a decisive victory, taking 56 percent of the vote. He swept Northern Virginia and Hampton Roads in addition to places like Winchester, Fredericksburg and Williamsburg. Former U.S. Rep. Tom Perriello secured 44 percent of the vote with a strong showing in college towns, including Charlottesville, Lynchburg, Harrisonburg and Blacksburg. But it was no match for the lieutenant governor, who spent more than $2.5 million flooding the airwaves with commercials portraying the lieutenant governor as a hard-working doctor who stood up to Big Tobacco to implement a smoking ban in restaurants.

PERRIELLO’S CAMPAIGN tried to challenge Northam from the left, pushing a platform that would raise taxes on the wealthy to pay for free community college. On the campaign trail, he was critical of taking money from Dominion, the utility that wants to build two controversial pipelines through Virginia. Perriello opposed the pipelines, but Northam repeatedly dodged taking a position on the issue. Campaign finance records show Northam has received more than $100,000 from Dominion and its executives during his political career.

“We need to wean ourselves away from fossil fuels. We’ll do that,” said Northam as pipeline opponents conducted a raucous protest outside the victory party. “We’ll continue to work with renewable energy. We’ve made great progress with solar and wind.”

Northam supporters portrayed Perriello was an opportunist, someone who carved out a moderate record in Congress by voting against federal funding for abortions and receiving the endorsement of the National Rifle Association. His campaign for Congress was the polar opposite, moving all the way to the left and receiving support from U.S. Sen. Bernie Sanders and U.S. Sen. Elizabeth Warren. Many of Northam’s supporters held deep suspicion about Perriello’s dramatic shift across the political spectrum.

“I think his record in Congress did hurt him, especially with the women’s health groups and the gun safety groups,” said Del. Jennifer Boysko (D-86), one of the more liberal members of the House Democratic caucus who represents Herndon. “But also he hasn’t really been active in Virginia until he showed up running for governor. I think that’s probably what hurt him more than anything.”

FAIRFAX spent more than $250,000 in a campaign against two opponents, a longtime political operative Susan Platt and a seasoned federal prosecutor Gene Rossi, who once mentored Fairfax at the federal courthouse in Alexandria. Since losing to Herring in 2013, Fairfax set out on a campaign to help raise money and support for candidates across the state, building up a steady stream of endorsements along the way. By the time his rivals announced their candidacies after Donald Trump won the White House, Fairfax had already lined up an overwhelming list of endorsements from elected officials across the state.

"In the last year, we’ve driven over 40,000 miles with our message of economic security and opportunity,” said Fairfax in a written statement following his victory. "We’ve met thousands of passionate Virginians who agree with our message and want our future for Virginia.”

“We must unite as Democrats for victory in November,” said Platt in a written statement conceding the race to Fairfax. "We cannot allow Virginia Republicans to roll back rights for women and spread Donald Trump’s hateful and dangerous agenda across the commonwealth.”