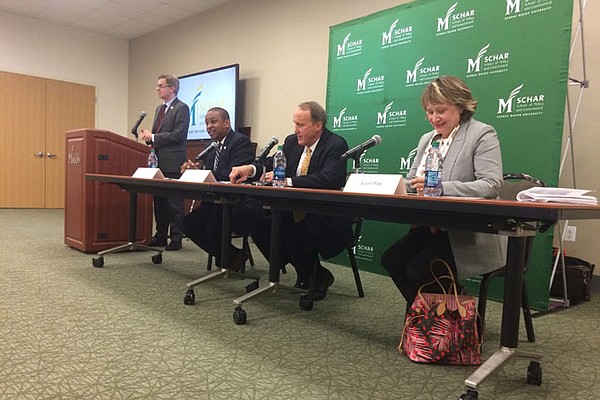 • $5,000 from Leonard Bennett of Newport News, a trial lawyer with Consumer Litigation Associates

• $3,000 from Joseph DiPietro of McLean, an attorney with the DiPietro Family Law Group

• $1,500 from Scott Sanderford of Alexandria with Everly-Wheatley Funeral Home

• $1,500 from Nash School of Washington, D.C., with the US Attorney for the Eastern District of Virginia

• $10,000 from Diane Smith of Arlington with the IT company Avail Media

• $5,000 from Rosel Schewel of Lynchburg, former president of the Lynchburg League of Women Voters

• $5,000 from Nina Victoria Weissberg of Leesburg with the commercial real-estate firm Weissberg Group

• $2,500 from Diane Cox Basheer of Vienna with the real-estate developer DCB Communities Inc.

• $2,500 from Russell Sullivan of Arlington with the law firm McGuire Woods

“Only one of the candidates on the ballot to be the Democratic nominee for lieutenant governor is not a first-time candidate: Justin Fairfax. Four years ago, he led an unsuccessful effort to become the Democratic nominee for attorney general. He lost that race to Mark Herring. But he’s been putting the pieces into place for another statewide run ever since, campaigning for other candidates and picking up a steady stream of endorsements along the way. He’s raised about a half a million dollars, far more than his competitors. During an interview at his campaign headquarters in an Arlington office building, Fairfax said one of his top priorities is boosting the economy by getting more Virginians into better paying jobs. Specifically he wants to get people currently in low-skilled jobs into what he calls middle-skilled jobs — jobs that require more than a high school diploma but less than a four-year college degree.

“These jobs are the fastest way for many Virginians into the middle class,” said Fairfax. "So you can be a certified welder, dental technician or long-distance truck driver. These are jobs that are typically not outsourced.”

He says paying for these jobs won’t be difficult because the economic boost from filling the jobs will pay for the plan.

“Those 175,000 jobs, if we filled them, would produce an additional $1 billion of income to Virginia’s families,” he said. “That’s an additional $54 million in tax revenues to the general fund.”

During an interview at his campaign headquarters in an Alexandria building, Rossi said he wants to use the bully pulpit of the office to address the opioid crisis in Virginia. And he says a law enforcement approach won’t work.

“We don’t need to add more fuel to the prison-industrial complex like Attorney General Jeff Sessions wants to do with building more prisons, charging more serious crimes for low-level people and instituting mandatory minimums when they’re not necessary,” he said.

But what about all those years he spent as a federal prosecutor locking up drug offenders as part of the War on Drugs? Wasn’t he part of the prison industrial complex?

“Absolutely! And I’ve got to make a confession: In the 1990s, I did prosecute people with mandatory minimums. I did aggressively pursue individuals who nowadays should not be prosecuted with such severity.”

Rossi says he does not want to defend his role in the War on Drugs. And he says he doesn’t think he should have to.

“And the worst thing for a politician to do is to stand by a position when they know they’re wrong, and I now realize that we have to treat addiction like it is, a disease.”

Another candidate in the race is Susan Platt, someone well-known in political circles because she’s managed many political campaigns. She may be best known for playing a cameo appearance she made in the 1996 documentary “A Perfect Candidate,” when she was serving as campaign manager for the reelection effort of U.S. Sen. Chuck Robb. Since winning that race against Oliver North, she’s spent years encouraging women to get involved in the political process.

“You know there have been 40 lieutenant governors: Six Johns. Two Jameses. Two Roberts. One L. Douglas. And no Susans. And I plan to be the first Susan.”

One of the key issues Platt has hit over and over on the campaign trail is the controversial pipeline Dominion wants to build through the state. She’s against it, and she says she refuses to take money from Dominion.